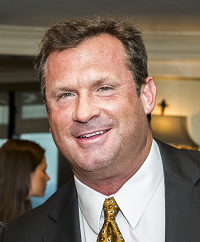 Dr. Kowalski was born in Meadowbrook, PA and graduated with distinction from the U.S. Naval Academy in Annapolis, MD with a degree in Mechanical Engineering. Upon graduation, he was awarded a full scholarship and completed a Master’s Degree in Mechanical Engineering at Catholic University in Washington DC. After five years of service in the Navy’s Civil Engineering Corps, he was awarded an Air Force Scholarship to attend the University of South Florida College of Medicine in Tampa, Florida.

After graduating with honors (A.O.A.), he completed his residency in neurological surgery at the Cleveland Clinic Foundation in Cleveland, Ohio. During his residency, Dr. Kowalski utilized his engineering background and distinguished himself academically conducting extensive research on spinal biomechanics. His research efforts culminated with the award of a prestigious two-year grant from the Neurosurgery Research and Education Foundation (NREF). After residency, he completed a fellowship in complex spinal surgery jointly with the departments of Neurosurgery and Orthopedic Surgery at the Cleveland Clinic Foundation.

After completing his fellowship, Dr. Kowalski served on active duty in the U.S. Air Force for four years. His service included a tour as the Operation Enduring Freedom Neurosurgeon during which he served as the sole neurosurgeon in Afghanistan. Dr. Kowalski served the balance of his military career in San Antonio, TX – the Air Force’s premier tertiary, worldwide referral medical center and only Level 1 Trauma Center.

Dr. Kowalski continues to maintain his status as a Registered Professional Engineer (PE) and participates in multiple ongoing new technology clinical trials with his fellow Florida Spine Institute colleagues. This along with his passion for alternative and holistic medicine help him to treat disease at the root of their problems and not just the symptoms they cause.